The Homelab – In A Tiny Box

Like most I need ‘something’ of a home lab for learning, testing and developing solutions on. My requirements are pretty straightforward. I mainly need a simple vSphere setup with vRA, vRO and a Windows Domain Controller providing Active Directory, DNS and DHCP. I had been running various VMs on my home PC under VMware Workstation, but with a family needing more time on the PC, I wanted something standalone that I could use from my work laptop. I also wanted something that was going to cost less to run than my PC. I read a few articles, such as this one that led me look at the Intel NUCs. I had a look around on eBay and found I could get some cheap HP rack servers/tower servers, but again, space, cost of running and hear, steered me away.

In the end I went with an Intel NUC. So far, I’m really pleased (and impressed) with it. All in, the total cost including shipping of parts came to £689GBP. 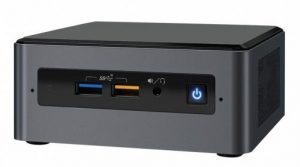 I went for a single Intel NUC8I5BEH. Straight out the box, it comes with a quad-core 8th generation Intel Core i5 Processor.

It is Optane memory ready, takes a 2.5″ SSD drive, a single M.2 slot, 4 usb 3.1 ports, a thunderbolt port and a single Gigabit lan port. Not a bad start. On paper, it supports up to 32GB of DDR4 Ram, but we will get into that in a minute. Using USB to ethernet adaptors I can get more Lan ports if needed.

Although it is stated that the NUC supports up to 32GB Ram, it will actually support and run with 64GB. I loaded mine with 2 x Crucial DDR4 32GB Dimms, giving me 64GB. It has been stable and reliable for 3 weeks now. 64GB makes life far more enjoyable than trying to work with 32GB!

For storage, I purchased a Western Digital 3D NAND SSD. It works well, with sequential read speeds of up to 560MB/s and sequential write speeds of up to 530MB/s . They do various capacities up to 2TB. I opted for a 500GB capacity, plenty for what I need and at £56.00GBP it’s a bargin. I had a spare 2.5″ SSD lying around that I installed into the NUC as well, a 480GB Sandisk SSD. All in all, nearly a TB of space, more than enough.

I installed ESXi 6.7 (latest build at time of writing) onto a USB key and use that to boot the NUC. ESXi picked up everything straight away, no dramas. The internal disks were discovered without requiring any fiddling about, so they both got formatted into VMFS volumes for the host to use. I created a couple of portgroups and sorted out my networking (basic, flat networking on a standard vSwitch, seperate routable network to the rest of my house). Then it was on to deploying some VMs and getting things going.

ESXi is running smoothly on the NUC

So, what am I running I hear you ask? Well, here you go. And yes, they are all useable, they dont run horribly slow at all.

With all the virtual machines powered on and whilst using vRA to deploy a VM from template, I still have enough free resources that the NUC isn’t suffering and starved.